Best things to do in Tenerife

Situated off the northwest coast of Africa, the island of Tenerife is the largest of the seven Canary Islands. A popular tourist destination, Tenerife boasts year-round sunshine, dramatic volcanic landscapes, and beautiful sandy beaches. 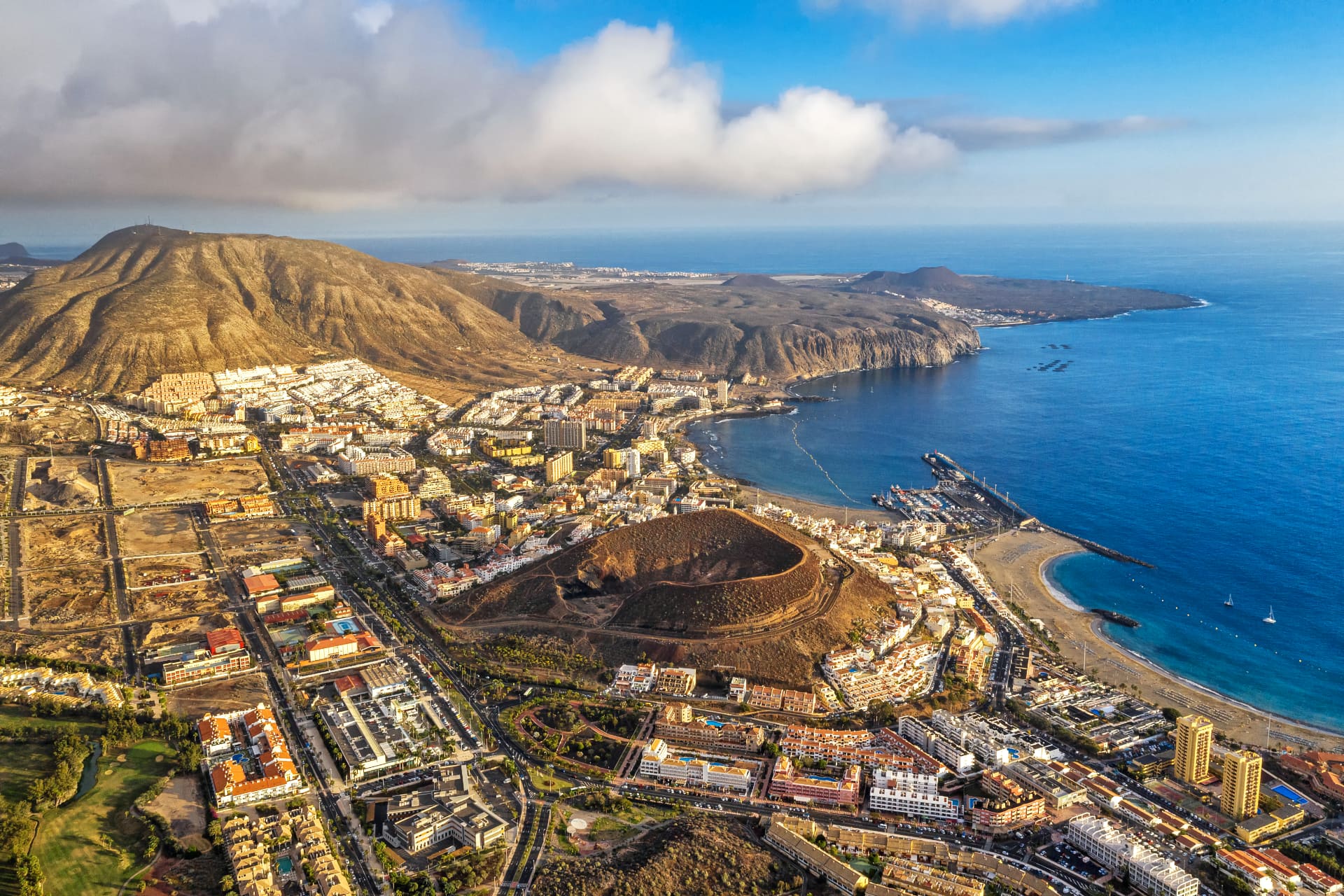 In this article, we’ll take a look at some of the best things to do in Tenerife. We’ll start with a quick overview of the island, followed by some top attractions including Mount Teide National Park, Loro Parque, and Siam Park. Other popular attractions worth visiting include Playa de las Teresitas, Puerto de la Cruz, and Jet Ski Tour. Finally, we’ll mention a few boat trips you can take to see whales and dolphins.

Tenerife is the largest and most populous island of the seven Canary Islands. It is also the most populous island of Spain, with a land area of 2,034.38 square kilometers and 886,039 inhabitants, 43 percent of the total population of the Canary Islands. With an average annual temperature of 21.2 °C, Tenerife is the warmest place in Europe. The island has a volcanic origin and is mostly mountainous with peaks reaching over 3,700 meters above sea level. The highest mountain is Mount Teide, a UNESCO World Heritage Site and Spain’s highest point. Tenerife is home to a diverse range of plant and animal life, including some endangered species such as the giantiarum lily and the Bolle’s pigeon.

The island has a long history of human habitation, dating back to the earliest known settlements on the island which date back to the 4th century BC. The indigenous Guanches were subsequently conquered by the Spanish in the 15th century. Tenerife is a popular tourist destination due to its mild climate, diverse landscape, and rich culture and heritage. Some of the most popular tourist attractions on the island include Mount Teide, Loro Parque (a zoo and theme park), Siam Park (a water park), and Las Teresitas (a man-made beach). Other popular activities include hiking, cycling, golfing, windsurfing, and scuba diving.

Tenerife has a subtropical climate, with warm temperatures all year round. The average temperature in Santa Cruz de Tenerife is 22.2 °C. The rainfall regime is characteristic of the Canary Islands, with a dry season from May to October and a wet season from November to April.

The island of Tenerife is mountainous, with several peaks above 3,000 meters, the highest being Mount Teide, which at 3,718 meters is the highest mountain in Spain and the third highest volcano in the world.

Tenerife also has some interesting geological features such as the Cueva del Viento, a lava tube that is one of the largest in the world, and La Gomera, one of the few islands in the world that still has its own laurel forest.

Tenerife is a veritable paradise for outdoor enthusiasts, with something to offer everyone from intrepid hikers to those simply looking to relax in the sun. With its year-round sunshine, dramatic landscapes and plethora of activities on offer, it’s no wonder Tenerife is one of the most popular tourist destinations in the world. Here are just some of the best things to do in Tenerife:

1. Hike up Mount Teide. Mount Teide is the tallest mountain in Spain and an iconic symbol of Tenerife. Located in the center of the island, it’s a popular spot for hiking and offers stunning views from the summit. There are a number of different routes you can take to reach the top, so whether you’re a seasoned hiker or a beginner, there’s something for everyone.

2. Visit Loro Parque. Loro Parque is one of the most popular tourist attractions in Tenerife and is a must-visit for animal lovers. Home to over 500 species of animals, including lions, tigers, dolphins and penguins, there’s plenty to see and do here. As well as watching the animals, you can also enjoy a spot of shopping or dining in one of the many restaurants and cafes on site.

4. Relax on Playa de las America. If you’re looking to relax and soak up some sun during your time in Tenerife, Playa de las Americas is the place to go. With its long stretches of sandy beaches and clear blue waters, it’s no wonder this is one of the most popular beaches on the island. There’s plenty to keep you entertained here too, with a range of bars, restaurants and shops dotted along the seafront.

5. Visit Siam Park. Siam Park is one of the biggest water parks in Europe and is a great day out for all the family. With its Thai-themed attractions and rides suitable for all ages, it’s no wonder this park is so popular with visitors to Tenerife. As well as slides and rides, there’s also a lazy river where you can relax and take in the stunning views over Siam Park. 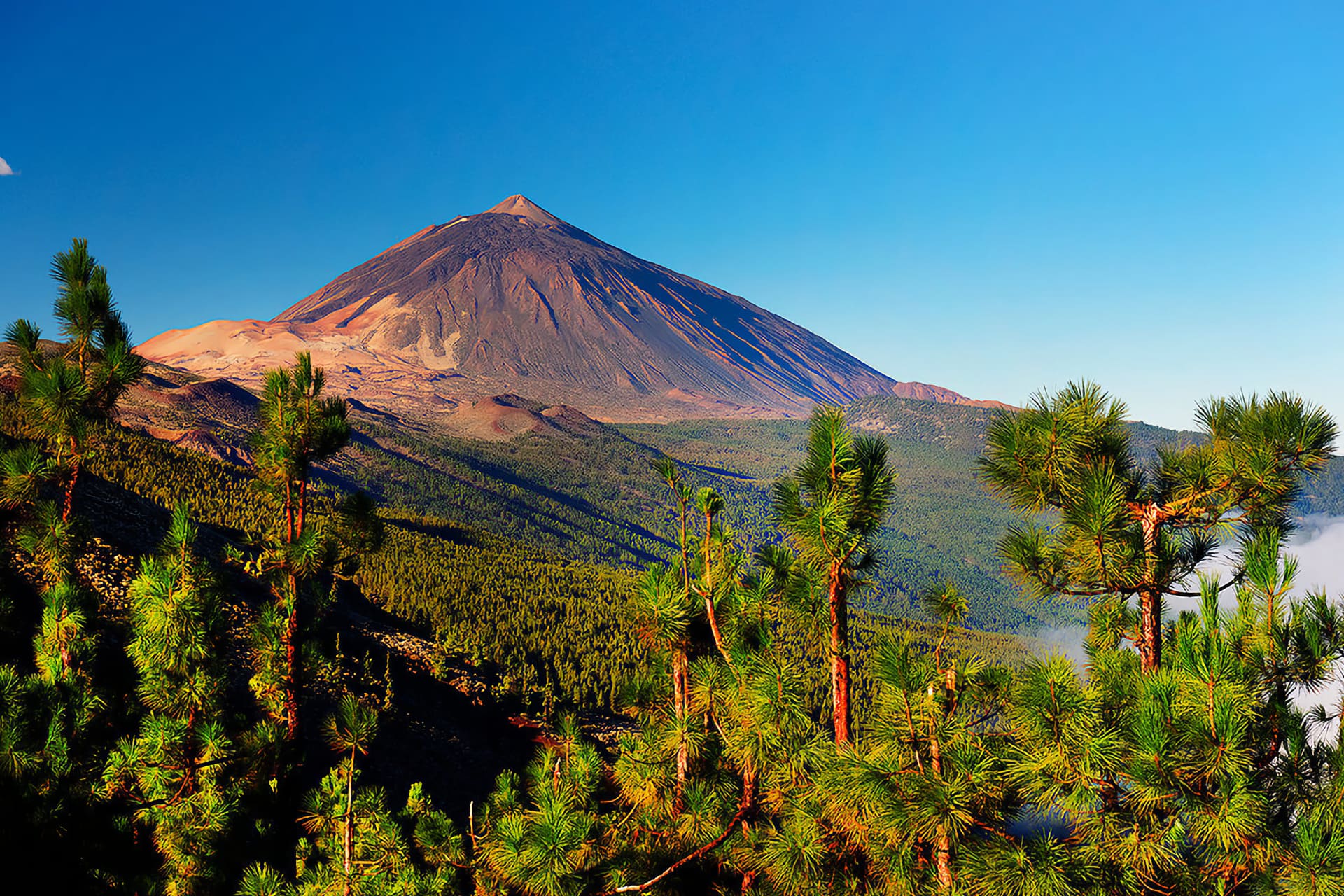 The best things to do in Tenerife are to explore Mount Teide National Park and to see the amazing wildlife that can be found there. The national park is home to some of the most stunning landscapes in Europe, and it is also home to a variety of unique wildlife. One of the best ways to explore the national park is to take a hike up one of the many trails that wind through the park. There are a variety of different trails to choose from, depending on your fitness level, and you can even take a cable car up to the summit of Mount Teide for stunning views over the entire park. If you want to get close to the wildlife in Tenerife, then a visit to Loro Parque is a must. This world-famous zoo is home to a variety of different animals, including parrots, penguins, tigers, and gorillas. You can also learn about the work that the zoo does in conservation and research. No trip to Tenerife would be complete without spending some time on one of the many beaches that dot the island. Playa de las Americas is one of the most popular beaches, and it is here that you will find a variety of different activities to keep you entertained, including water sports, fishing, and sunbathing.

Loro Parque is one of the most popular tourist attractions in Tenerife. 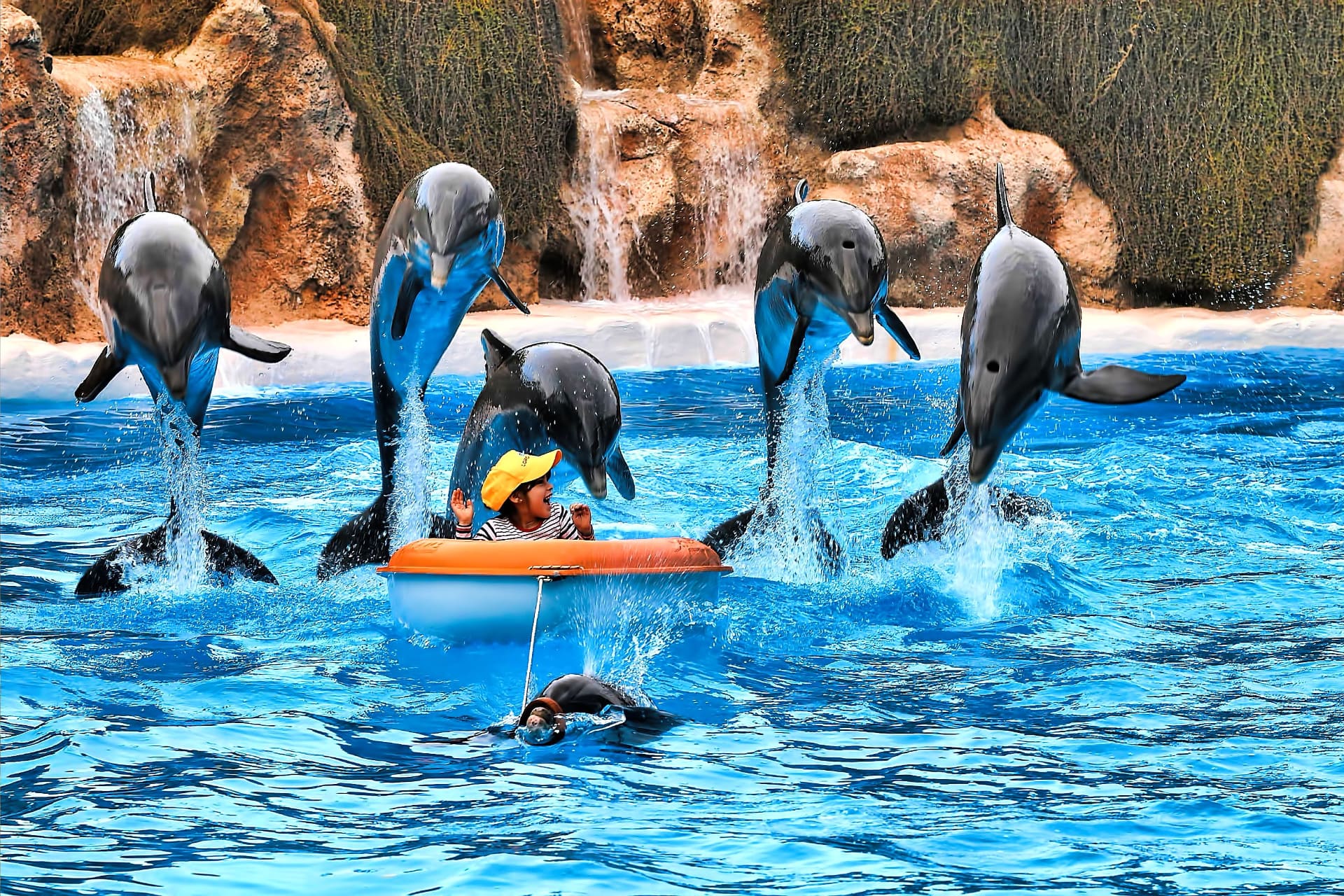 A must-see for animal lovers, the park is home to a variety of different species of parrots, birds and mammals. Visitors can see shows featuring dolphins, penguins, sea lions and orcas, as well as take part in a variety of educational activities. There is also a huge free-flight aviary, where visitors can get up close and personal with some of the resident birds. For those looking for a more adrenaline-fuelled experience, there is also a rollercoaster and water park on site. With so much to see and do, Loro Parque is the perfect place to spend a day out with the family.

Siam Park is one of the best things to do in Tenerife. 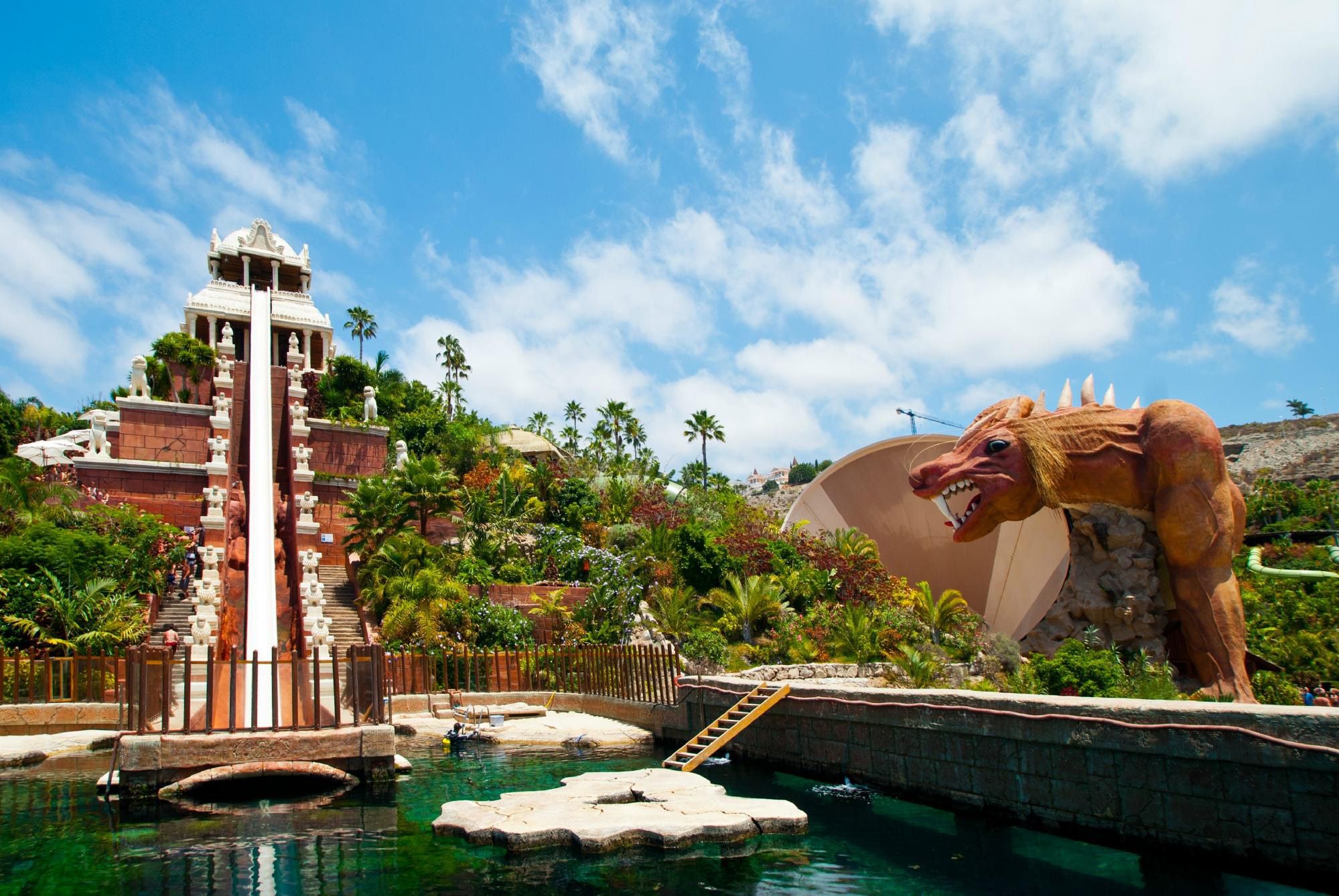 This water park is full of slides and rides for all ages, as well as a relaxing lazy river. There are also plenty of places to eat and drink, so you can make a day of it.

In addition to the above mentioned attractions, Tenerife has plenty more to offer tourists. For those who enjoy hiking, the Anaga Rural Park is a great option. This park covers over 9,000 hectares and includes several hiking trails of varying difficulty.

Fans of architecture and history will enjoy the Plaza de Espana, which was built in 1929 for the Ibero-American Exhibition. The square is home to a fountain, gardens, and several impressive buildings. Other notable historical landmarks include the Iglesia de San Cristobal de La Laguna (the oldest church on the island) and the Castillo de San Felipe (a 16th century fortress).

Finally, no trip to Tenerife would be complete without spending some time at one of the island’s many beaches. Playa de las Americas and Los Cristianos are two of the most popular beach destinations, but there are plenty of other options to choose from as well.

One of the best things to do in Tenerife is go on a boat trip to see whales and dolphins. There are many companies that offer these trips, and they usually last around 2-3 hours. The best time to see whales and dolphins is between the months of April and October, when they are migrating through the waters off the coast of Tenerife. These boat trips are relatively inexpensive, and they are a great way to see some of the amazing wildlife that can be found in the Canary Islands.

There are many things to do in Tenerife, but one of the most popular is to go on a jet ski tour. Las Galletas is a great place to go for this, as there are many operators offering tours. 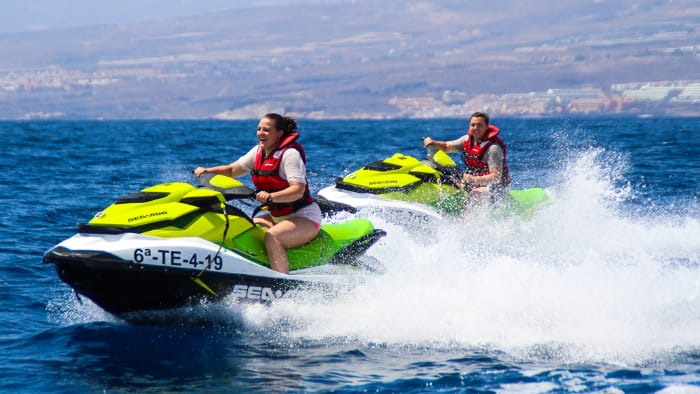 One of the best things about jet skiing in Las Galletas is that you can see some amazing sights. As you zip around on your jet ski, you’ll be able to take in views of the nearby cliffs, the ocean, and even wildlife such as dolphins.

If you’re looking for an exciting activity to do in Tenerife, then a jet ski tour is definitely worth considering. You’ll get to see some amazing scenery and get some exercise at the same time – what more could you ask for?

If you want to experience some of the best that Tenerife has to offer, then a visit to Playa de las Teresitas is a must. This stunning golden sand beach is one of the most popular on the island and for good reason. With crystal clear waters, plenty of sun and a relaxed atmosphere, it’s easy to see why so many people love spending time here. There’s plenty to keep you entertained at Playa de las Teresitas too. If you’re feeling active, you can try your hand at windsurfing or paddle boarding. Or if you just want to relax, there’s plenty of space to sunbathe or take a leisurely swim. And when you get hungry, there are plenty of beach bars and restaurants serving up delicious food and drink. So whether you’re looking for a day of relaxation or a bit of adventure, Playa de las Teresitas is the perfect place to be.

Puerto de la Cruz is one of the most popular tourist destinations in the Canary Islands. It is known for its black sand beaches, lively nightlife, and abundance of activities to keep visitors entertained.

One of the most popular things to do in Puerto de la Cruz is to spend a day at one of the many black sand beaches. Playa de las Teresitas is one of the most popular beaches in the area, and it is easy to see why. The sparkling black sand and clear blue waters make it a perfect place to spend a day relaxing on the beach. There are also plenty of restaurants and bars in the area, so you can grab a bite to eat or a refreshing drink while enjoying the views.

If you are looking for more of a party scene, then you will want to head to Playa Jardin. This beach is known for its lively atmosphere and is often filled with tourists enjoying cocktails and dancing the night away. There are also several bars and clubs in the area, so you can keep the party going until the early hours of the morning.

If you are looking for some adrenaline-pumping activities, then you can head to Lago Martin. Here you can go windsurfing, kitesurfing, or sailing. There are also several walking and cycling trails in the area if you want to explore the natural beauty of Puerto de la Cruz.

No matter what your interests are, you are sure to find plenty of things to do in Puerto de la Cruz. With its beautiful beaches, lively nightlife, and abundance of activities, it is no wonder that this destination is so popular with tourists from all over the world.