History of creating a jet ski

Few people know that the inventor of the sitting and standing jet ski is the same person — Clayton Jacobson II.

Jacobson worked as a banker in Arizona and was interested in motorcycles, then moved his hobby to the water element. Although he loved dirt bike racing as a method of dealing with stress, he hoped that by putting it on the water, violent accidents would disappear.

The original design of the first jet ski was developed in the mid-sixties of the twentieth century. Powered by an internal water pump, instead of an outboard motor, this jet ski was entirely made of aluminum and had a vertical control handle. Eventually, Jacobson left banking and devoted himself entirely to developing his idea, and by the end of 1965 had already created a working prototype. It was very different from modern jet skies, but still some similarities were also present. The second prototype was completed a year later and its body was made of fiberglass.

In 1967, Clayton joined the Bombardier Corporation, which produced Ski-Doo snowmobiles. He developed a sit-down jet ski known as the Sea-Doo, which went on sale as early as 1968. The hull had a more rounded shape, compared to the standard V-shaped hull, and the outer skin was very narrow and long. However, there were some flaws in this design, it was said that this jet ski was not powerful enough and bulky with its rounded body. 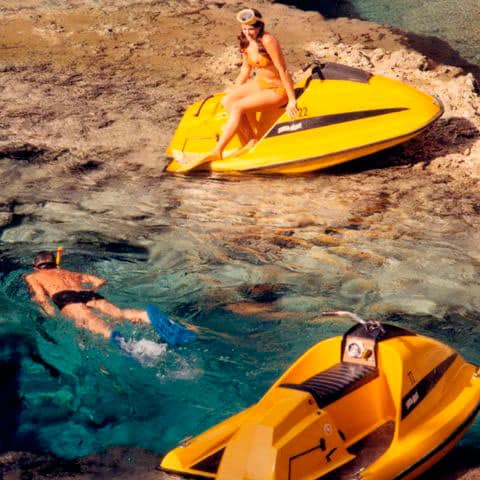 The original model had a 13 KW air-cooled engine with a volume of 318 cubic cm. Yet the project suffered from mechanical problems as well as cheap components and materials. At that time, Bombardier held a leading position in the snowmobile market, so the Sea-Doo was produced for a limited time from 1968 to 1970. Then production was stopped and the rights to the invention were returned to Jacobson in 1971. 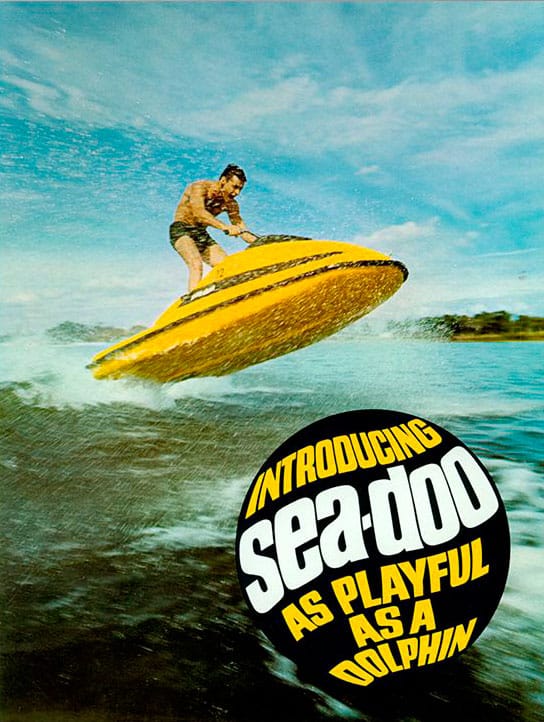 Even though Jacobson continued to implement his idea, he could not enter into contracts with other manufacturers until the end of the license period of Bombardier, until 1971. The day after the license expired, Clayton entered into a partnership agreement with Kawasaki and sold them the rights to the patent. He developed a stand-up jet ski model, similar to the previous original project, for Kawasaki, giving rise to the Jet Ski brand. The difference was that the characteristic feature was a collapsible vertical pole that was screwed into the deck of the jet ski. The design concept was directed by a single rider.

In 1972, Jacobson and Kawasaki created 6 different prototypes, before releasing only 2 models to the market in 1973: the WSAA and WSAB. Clayton later claimed in court that Kawasaki terminated the agreement legally and told him that it did not need his patents. In 1976, he filed a lawsuit, and in 1979 the conflict was settled. Kawasaki, however, remained the exclusive manufacturer of jet skies until Jacobson signed a licensing agreement with Yamaha in 1986. In connection with the success of Jet Ski Bombardier has re-released the Sea-Doo in 1988. By 1991, Jacobson had earned about $ 3 000 000 on the copyright fee for the jet ski.

In 1989, Jacobson again launched legal action against Kawasaki and its two American affiliates, claiming that they had incorrectly filed a patent for Jet Ski in Japan, calling the invention the property of company employees. Previous claims were dismissed by the court, but Jacobson was later awarded $ 7 500 000.  as compensation for loss and $ 13 500 000 of penalties in July 1991 for libel and defamation. However, in September of the same year, the ruling was overturned, based on the fact that the evidence was insufficient and a new trial was ordered. The two sides reached an agreement in August 1992. The amount of compensation was not disclosed, but Kawasaki Motors Corp. U. S. A. agreed to recognize Clayton Jacobs as the inventor of the jet ski and all charges against Kawasaki were dropped.